May 31, 2017
I begin this blog post with an acknowledgment of the irony of the situation. But I'm taking the opportunity use this chance to highlight the social media snowball and how to use your momentum responsibly. This post is in no way an indictment of MalwareTechBlog, nor am I implying that they did anything wrong here. If I come across as petty it is intentional and not sincere.

On May 26th, 2017, I tweeted about a bug with Microsoft Office in which a background task would flicker a command prompt briefly due to it being mistakenly registered as a user-context task.


Thirty-seven hours later the Savior of the Internet, Slayer of Wcry, MalwareTechBlog posted a tweet that said basically the same thing. With no significant additional information.

Social media is all about visibility. After MalwareTech posted their tweet SwiftonSecurity retweeted it, and between both of their substantial platforms a very visible conversation about this background task occurred. I sat at my desk and watched it happen in real time in amusement. I made a petty remark about it at the time.

On May 31st, 2017, I replied to a tweet by SwiftonSecurity with a witty joke about an article they linked. Nine minutes later MalwareTechBlog posted basically the exact same joke except publicly rather than a reply.

I made another remark about it and MalwareTechBlog showed up in my notifications with sympathy. It's a shared experience on social media because everyone is a product of their surroundings, in this case technology and security, and often encounter similar problems and often have similar senses of humor.

Here is some information about social media. As Alexander Payne pointed out, Twitter does not treat everyone's tweet with fairness. Despite my joke being first and Alexander Payne meeting the criteria to see my joke (they were following both SwiftonSecurity and I) my tweet appeared later in the time line due to default settings pushed out by Twitter. There are biases built into the system to promote people who are "popular."

This is the part that I wanted to highlight. When Daniel Gallagher appeared in the thread and replied with a joke about MalwareTech's popularity that particular tweet became visible to the likely thousands of people who follow both MalwareTech and himself. My tweets, and any replies from that point forward, would not be visible to their followers, but their replies to the thread would.

You can see the imbalance here. While I was looped into the entire thread by virtue of Twitter's changes to how threading functions, none of my additions made it to the majority of MalwareTech's or Gallagher's followers. Many of them likely were not aware of how the thread started or what it was about. Regardless those people felt the need to chip in their support for good ol' MalwareTechBlog and their stellar research that provides valuable things to the community.


Nobody had ill-intent here, but because of my lack of a platform not only were my comments and additions suppressed but Twitter felt the need to really highlight how valuable MalwareTech's contributions to the community were. My notifications were filled with retweets and likes and support for MalwareTech from people who didn't follow me and likely didn't know I was a part of the conversation. And they certainly didn't know how the thread started.

I said that I wasn't here to complain about MalwareTechBlog and I'm not. But this is a prime example of how smaller voices get drowned out on Twitter, and why large voices in the community stay loud. People like MalwareTechBlog are high-profile enough that Twitter gives their voice priority, and being high profile means they are more likely to be noticed by their high-profile peers like SwiftonSecurity and subsequently highlighted. It creates a social media snowball effect that perpetuate their visibility in their circles.

This isn't a fault of them, it is a fault of the system. If you have been shoved down the hill to start your snowball chances are you have no reason to examine the system feeding your growth. As often as I muse about how hard social media is I do understand the playbook. Once the system favors you, you have the ability to do what SwiftonSecurity did to me and promote those quieter voices that other people don't get to see. I didn't get 550 followers because I talked to every single one and rubbed shoulders, I got 550 followers because someone highlighted what I was doing. More importantly they did so while letting me speak for myself rather than speaking for me.

If you have a platform you can make the choice to use to help other people in your community, or you can do nothing with it. One option is not better than the other, or more right. Using your platform to boost the voices of other people carries with it the responsibility of doing so with integrity. After all you wouldn't want to support and give a platform to shitty people.

August 04, 2017
I recently returned from a trip to Vegas to attend BlackHatUSA 2017 and DEF CON 25. While writing my travel blog I realized that I had a lot of stories, and a lot of travel advice. After working on it a little I decided it would be most useful to post the advice and stories separately. This post will contain all my advice for navigating your first DEF CON adventure. I will share stories in future posts. I am going to jump straight in because I have a lot to share here. Packing Never check bags if you can avoid it. Prevents loss, theft, or mishandling. If you check bags, keep all your valuables on you. Pack light; leave room for treasure. If you plan on collecting lots of treasure then pack an ultralight duffel in your carry-on. They pack small, you can check it on the trip home. Personal item should be a cross-body bag or backpack. Put your electronics and valuables in it. Carry-on item should be a frameless soft-bodied item. It’ll hold toiletries and clothes; all your valuab
Read more

August 25, 2017
One of the many things that I paid attention to as I walked the halls of Defcon nearly a month ago was the devices people used for the capture-the-flag (CTF) events. During my first walk around the contest area I noticed many people sat against walls or such with macbooks. On later passes I started taking note of the devices that other people were using and a common one was the Asus C201 chromebook. Chromebooks are basically low-spec linux laptops designed around the use of Google Chrome. Though like many linux devices once you gain access to a terminal you often have free reign to alter the system and gain access to powerful command line tools. About a week and a half ago I picked up an Asus C201 for about $250 CAD. I will talk about what my typical use case is, what I wanted out of the C201, what my experience was, and a walk-through of how I set mine up to meet my use case. UPDATE:   Sarah Jamie Lewis wrote a thread on twitter adding her 2.5 years of experience to this s
Read more 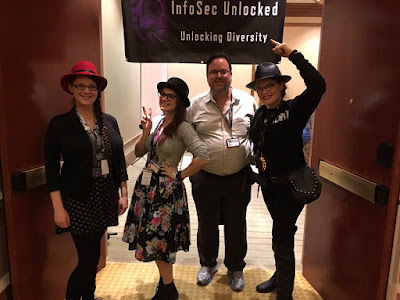 This is part two of my travel blog for going to BlackHatUSA and DEF CON. Part one covered travel and first-time-attender tips in point-form, and you can read it here . In this post I am going to speak about my experience at DEF CON and, without names, the people that I met there. The post will be broken up into topics rather than chronologically. This has been difficult to sit down and write because of a lot of interpersonal drama that happened on Twitter and in the convention halls that I, frankly, don't want to discuss again. I wanted to talk about things that did not have to do with the drama. First Impressions After I arrived at the Ceasers on Thursday, I met up with some people and had to deal with that . I had been explaining who I was to everyone that I already knew online for a couple days at BlackHatUSA and had become increasingly comfortable with the process. Approaching people, though, never got easier, but I learned to introduce myself and follow with my twitter
Read more